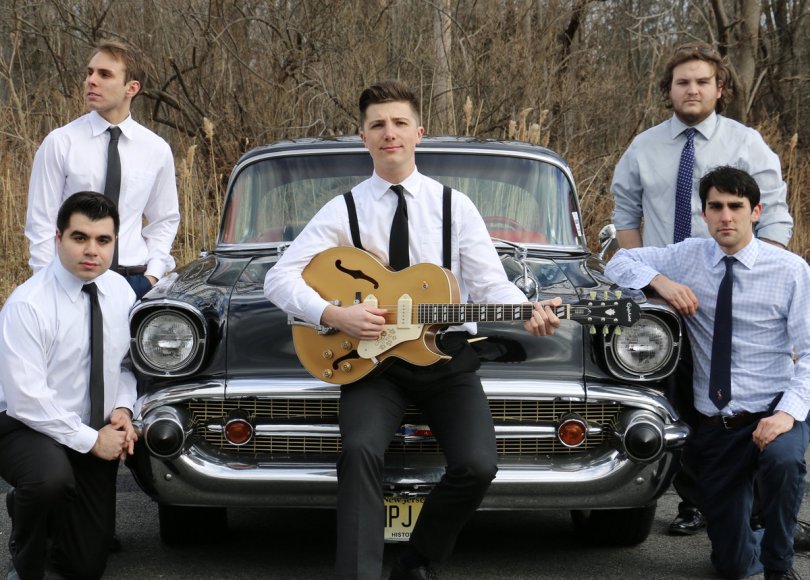 When I’m listening to random playlists on Spotify and I think “who is this?” and have to stop what I’m doing, I know that I’ve stumbled across a band or artist that could be my new obsession. After having one of these experiences, I introduce you to The Vespids. This might be my favourite band that I have discovered in the past couple months and they have, as I’m writing this, a total of 53 followers on Spotify (one of which is me!). It’s heartbreaking. So is a vain attempt to get people to notice them, I’m going to write a whole blog about it. Every little bit counts, right?

Background from the Band

We are an independent rock band based out of NJ, right outside of NYC. I (Hunter Kino) recorded and produced my band in my home studio. We then put out those singles by ourselves in hopes of getting exposure online. We always found it difficult for us to play gigs due to the “pay to play” venues throughout NJ and NYC and also we were under 21 so we couldn’t play at bars or venues. There are basement shows near us, but honestly people were always looking for indie pop and metal acts to perform so we felt out of place.

Our band began playing at our colleges, Stevens Institute of Technology, Quinnipiac, and Ramapo College, but the showcases didn’t really grow our fanbase due to small attendance. We recently turned 21 and are looking for more gigs to play locally, but it has been a difficult experience. We are currently working on an album and ep, which we hope to release by the end of the summer. A producer Godfrey Diamond, heard our music and reached out to work on an album with us. We met at his studio in Brooklyn, NYC, but plans didn’t work due to the coronavirus.

The opening riff on this track is what really grabbed my attention the first time I heard it. This band has a talent for letting the openings of their songs breathe. And just when you think you know what the song is going to sound like, another layer of instrumentation comes in and the track picks up. It’s really engaging.

I love the vocals on this not only because they have just enough rasp to fit the vibe of the song but also because they have a kind of classic rock sound to them. In fact, the whole track feels like it could have been written thirty years ago–and I mean that as a compliment.

A lot of what goes into achieving that sound is the way Mezini ends his phrases. There’s this pushing of the sound at the end of a line that adds a hardness to those endings–which is an interesting, stylistic choice.

Any song that starts with just drums always gets my attention. I wish I knew more about how drums are played so I could really talk about them. As it is, this is a wonderful way to grab onto the listener before the screechy guitar slides in and the song really starts.

The bass in this track is also amazing. I love how it rumbles behind the vocals throughout the verses. Yet another instrument that I don’t know all that much about but i feel like most people forget about the bass player so it’s nice when there’s a song that lets the bass have some attention.

This is definitely a get-hyped song. I’ve had it come on a few times in the last week when I have my music on shuffle and I still rock out every time. It’s such a driving song that you don’t even notice it’s a 4 1/2 minute song–there’s too much energy behind it.

While I was in the middle of writing this blog, they released this single! It was as if they knew I like to have at least three songs when I write these.

First, we need to talk about how cool the opening of this song is. Starting with that single guitar riff before the rest of the band comes crashing in And just when you think that’s it, there’s this slide on the fret board that transposes the riff into a higher key. It’s simple in execution but it’s a strong way to start off a song.

The vocals in this track are fantastic. Not only is the melody pretty fast–Mezini is getting a lot of words in–but there is also some nice vibrato going on too, especially when he sings ‘imagination’. The calling back and forth with the main vocals and the backing vocals is nice too–it adds to the urgency of the song.

Overall, I think this band is awesome. They only have these few songs from what I could find and I enjoy all of them–in fact I really love them. I get them stuck in my head and I’m already starting to sing along. They remind me a bit of Royal Blood–who are an amazing band in their own right–in how there is this explosion of sound that is built-up to at the begin of each song. Now I just have to wait until they release more stuff (sigh).

I hope you guys are enjoying this… segment? series? project?… whatever it is, because I’m having a lot of fun searching out new music from artists that don’t have that many followers (yet). If you like any of the music I’ve been writing about, then make sure to check out these bands/artists on Youtube and Spotify because they need more love!