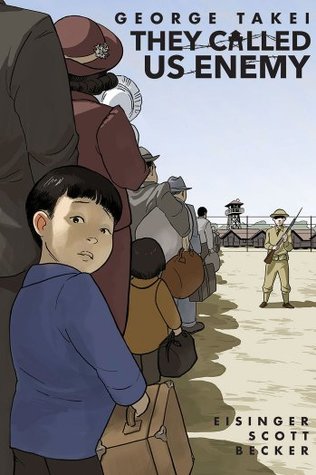 I’m not sure exactly what I was expecting when I picked up this graphic novel but it was not the emotionally draining story I got. That being said, it is not all darkness. There are light, heartwarming moments in this novel. It’s this careful balance that makes the novel enjoyable and, quite frankly, bearable. Even if you’re one of those people who has no idea who George Takei is this is still a story that will captivate you.

Long before George Takei braved new frontiers in Star Trek, he woke up as a four-year-old boy to find his own birth country at war with his father’s — and their entire family forced from their home into an uncertain future. In 1942, at the order of President Franklin D. Roosevelt, every person of Japanese descent on the west coast was rounded up and shipped to one of ten “relocation centers,” hundreds or thousands of miles from home, where they would be held for years under armed guard.They Called Us Enemy is Takei’s firsthand account of those years behind barbed wire, the joys and terrors of growing up under legalized racism, his mother’s hard choices, his father’s faith in democracy, and the way those experiences planted the seeds for his astonishing future.

There is something very powerful about this graphic novel, and not just because of the subject matter. There’s something about not only hearing a personal and tragic story from someone that you recognize–I’m assuming at this point you know who George Takei is–but also seeing it through the artwork. Seeing a lost little boy in alarming surroundings should never be easy and, while the art design is pretty simple in this, you can see every emotion cross his face.

It also sparked some curiosity on this subject for me because, while I was aware that Japanese-Americans were incarcerated during WWII, I didn’t understand what that really meant. And even now that I have read this novel I can’t say that I fully understand it–it’s not something I’ve ever experienced. But I think it’s important to try and understand because, unfortunately, this is not as far in the past as I would like it to be.

It’s sad. It’s supposed to be sad. But there is a point at which I just need to step away and take a moment.

This novel took me longer to read then I thought it would not because it was long or challenging to read but because I could only take so much heartbreak and guilt before I had to step away for a few days.

Don’t get me wrong the story was compelling and there is some really amazing artwork here. I was captivated by the story. But it was difficult to read from an emotional standpoint. There is some heavy stuff in this graphic novel that’s meant to pull at your heart–and I think it should. No one should be able to read this novel and feel nothing. But it also makes it difficult to recommend. I usually read because I want to escape and this is not the kind of escape I usually look for. I think it’s an important graphic novel to exist and people should be aware of this story but be prepared for the emotional journey that comes with it.