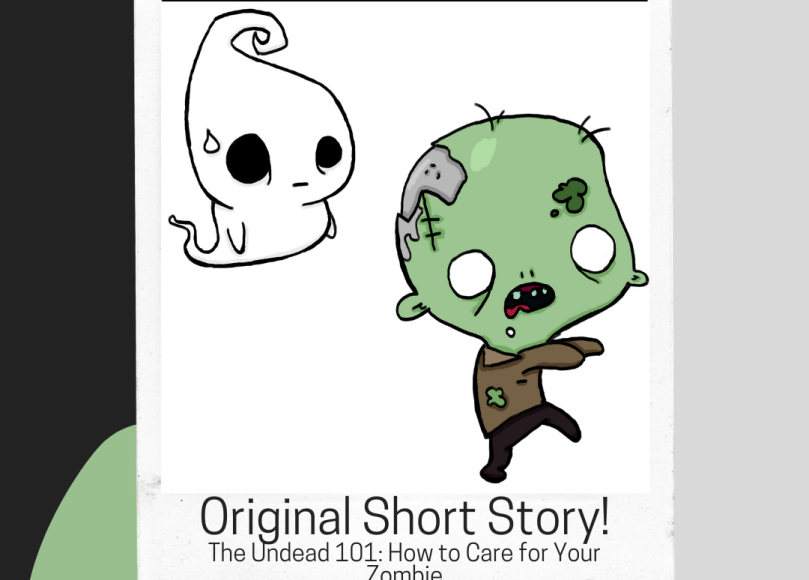 Hi, it’s me. So I wrote this goofy short story because I wanted to write something ridiculous that would make my friends laugh and my brother loved it so much he said I should share it so here it is. Okay, bye.

So there I was, hovering in the corner of an abandoned pub, watching my zombified corpse slamming ineffectually into the doorframe of the entrance to the washrooms. I would like to say that I found this distressing but after a while you get used to it. It’s incredible how quickly the human mind can make even the most bizarre situations into the normal baseline. At least there weren’t any stairs in this building for Zombie-Me to trip down… again. You’ll just have to believe me that watching yourself nose-dive down a flight of stairs like a doll tossed by an enraged toddler only to see yourself get up and keep walking like you didn’t just scrape off half your face is an odd experience. Unless you too are dead, in which case, you should probably prepare yourself for that.

Of course, I wasn’t always so blase about being undead twice. It’s one thing to feel your soul ripped from your body–it’s another to then see your body get up and go for a stroll. I tried to go through all the horror movies I had ever seen and come up with some kind of plan but I mostly just thought “AAAAAAHHHHH!!!!” so it wasn’t very productive. In all honesty, I didn’t enjoy scary movies all that much. In my defence, I didn’t know that having an intricate knowledge of ghosts and zombies would be a useful prerequisite for dying.

Nor did I pay attention to my friend, Josh, as he explained his fool-proof plan for surviving an apocalypse. I like to believe it worked, whatever it was, and that at least someone was still alive. I hadn’t seen a living person in a while.

So you can imagine my confusion when I heard a crash like a cascade of pots and pans on tile from the back room of the pub followed by muttered cursing. The crashing, sure–zombies walk into things all. the. time. But the cursing?

That’s something only the living do.

I felt many things on this realisation: confusion, excitement, apprehension, doubt. Someone had survived til now and even if they couldn’t see me at least it would be a change from the constant moaning and milky eyes I found myself used to.

I need you to understand when I say I hadn’t seen anyone for a long time. Even before I died. I had been talking to myself–or at least Zombie-Myself–just to fill the space. I had been bumming around after Zombie-Me because something still linked us together. It had been zombies in all directions for months!

I need you to understand so you won’t get mad at me for forgetting about the whole there-are-zombies-everywhere thing for just a moment while I daydreamed about the possibilities of being around the living.

Unfortunately, it was at this moment that Zombie-Me decided to be vaguely intelligent for the first time in their undead life. On average, zombies don’t do much. Moan, stumble over their own feet, fall down stairs.

And eat the flesh of the living. They’re not very good at doors but they know that loud noises usually mean activity. Activity means creature. Creature might be alive. (See first sentence for conclusion).

Zombie-Me turned away from the washroom in the same precarious way a cartoon duck would and laboriously dragged its decaying body towards the sound. Unsettling moans wheezed out of its torn throat.

This was definitely an “oh shit!” moment for me.

Until I remembered that zombies move at the speed of an elderly driver during rush hour traffic. Plus there were still chairs and tables scattered around the pub’s floor. Hunger made zombies slightly smarter. It was going to take Zombie-Me a few minutes to navigate the room.

After expertly ninja-ghosting my way into the back room, I was able to see what all the noise had been. It was–pause for effect–a cascade of pots and pans on tile! Oh, and there was a real, fully alive human there with all their limbs and everything. Which is probably how the dish rack got tipped over.

I’m not going to lie, I was kind of hoping for that stereotypical action movie lead. Muscles that look like he has combat training, aesthetically placed dirt smudge on his cheek, a make-shift weapon strapped to his back. What I found was… Josh!?

I’m sorry. It was, in fact, not Josh. But how amazing would that have been? From now on I will refer to him as Not-Josh in honour of my probably dead friend and because saying “the guy” seems rude.

Not-Josh was the kind of skinny that, on a day with moderate winds, he would get blown into a ditch walking into work. Not that that’s ever happened to me… Anyway, so no on the muscles but there was definitely dirt–the not pretty kind though. Let’s just say it was one of those moments when I was glad I couldn’t smell anymore. And there was a weapon, of sorts. He had one of the frying pans in a white knuckle grip as his bulging eyes stared at the door.

I sighed, which involves a lot of thought when you can’t breathe.

And it was a bad idea because then his eyes were so wide I was worried they would plop onto the floor and he was staring at me. Right, not invisible. Good to know.

I did the only thing I could: awkwardly wave and look at the ground. “Oh, um, hi.”

My voice sounded hollow and seemed to sink within me instead of the sound travelling through the air. I wasn’t entirely sure how I was able to do it at all. Not because of the social awkwardness–though that probably didn’t help–but because I didn’t really have any of the mechanisms involved in talking anymore. Study ghosts, kids, turns out it’s a good skill to have.

I tell you all this because in real-time there was a long pause in which Not-Josh just sort of stared at me and when I’m uncomfortable I talk until it goes away. All this to say, he did eventually wave back. Achievement unlocked: successful interaction with the locals!

“Um, so you should probably know that that’s a zombie in the other room and it heard you so it’s coming to try to eat you which I’d rather not see because the zombie is me but not really.”

In retrospect, I probably should have gone with the classic “boo!”. It would have been a nice ice-breaker.

“Zombies. Those corpse things that have been infecting the planet. Rotting flesh and missing limbs. Can’t miss them.”

“No, that part I got. But the zombie is you? But you’re you, here.” He vaguely gestured at my floating image.

“Yes, but I’m also there and there-me really wants to eat here-you and as much as I would like to explore the mechanics of the afterlife with you maybe you should run?”

He looked back at the door then around the room. “Okay, run where? Because one zombie is scary and all but there are literally thousands of them outside which is far more terrifying.”

It was a good point to make.

“So, what do you think we should do?”

There was an intense moment of thinking. Eyebrows were drawn. Chins were scratched.

“What do you know about ghosts? Like actual ghosts, not the Casper kind?” I asked.

“My knowledge is limited. Why?”

“Most of the stories where people try to get rid of ghosts are about finding what is keeping the ghost on this plane of existence.”

“We find the thing that’s keeping me here, destroy it or whatever, and then I can move on to the afterlife and not have to watch you die horribly! It’s brilliant!”

“Can there be a plan where I don’t die horribly?”

“Good, because I think I have one. We kill the zombie and I hangout in here until all the zombies outside rot away and it’s safe to go out again.”

Not-Josh picked up a sizable knife from the counter and turned to the door like the conversation was over. Killing Zombie-Me was probably a good way of getting me to stop being a ghost and Not-Josh would probably get to live. All good things! However, I had already seen myself die and watching someone brutally remove my head, even if it wasn’t entirely me, was not something I wanted to be a part of.

I floated up beside Not-Josh. “I would like to propose we find a plan where neither of us die horribly.”

“Aren’t you already dead? Why should it matter?”

“I might be dead but I still have feelings. And probably rights if this whole apocalypse thing blows over and I talk to the right people.”

It was at this moment that Zombie-Me crashed into the door. I had always been really bad at timing so I should have foreseen this.

“Can we talk about this later,” Not-Josh asked, gripping the knife tighter and staring at the door as it shook.

“I would like to remind you that both plans we’ve come up with involve one of us dying so no, we cannot talk later.”

Not-Josh rolled his eyes at me and stormed the door.

What an odd phrase: to storm. Storms don’t do anything on purpose; they just exist.

Oh, right, zombie. I mean, you’ve seen the movies. Clumsy punches were almost thrown and incoherent noises were made. There was a tense moment when it looked like the dastardly villain would prevail but in one last desperate effort our hero was victorious!

Basically, Not-Josh was really bad at fighting and almost died but he didn’t because something came over me and I threw a frying pan at my face and my head popped off. I had been dead for a while so there wasn’t much left in the neck area–probably all those tumbles down the stairs.

My head rolled onto the floor and Zombie-Me took a staggering step backwards to recover from the impact. Which is how it ended up stepping on, and promptly crushing, its own head. Our head? The Head?

And that’s the story of how I died… the second time. Or possibly third or fourth depending on what you count as “dying”.

Let me know what you thought of the story!