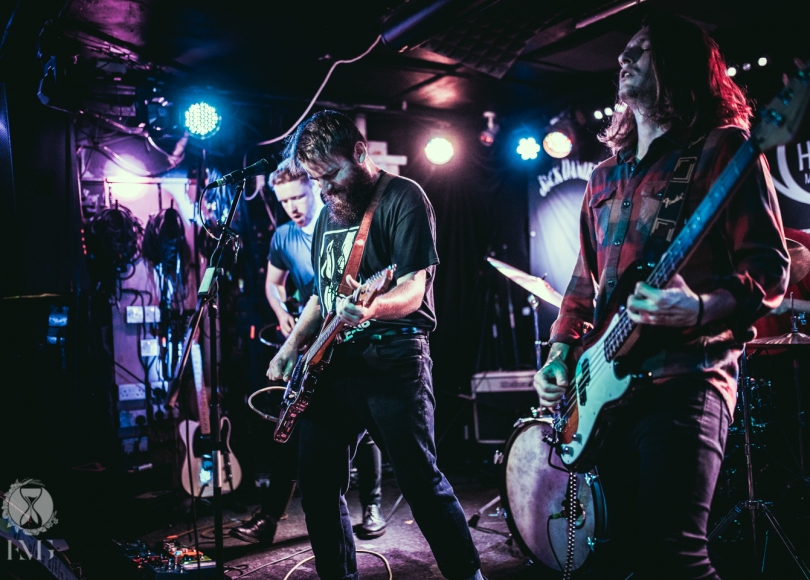 Ernie (Vocals/Guitar): Nirvana were the first band that made me go “D–, I want to do this”. I heard Nevermind at about age 10 and it made me gear shift completely and throw myself into music. Music that didn’t seem out of reach was my trigger. My Dad had always shown me jazz musicians, Hendrix or Led Zeppelin and they just appeared completely superhuman. Nirvana were the first band that made me feel like music was attainable. And I’m lucky to have a creative and supportive family, that’s always inspiration to keep going at what you love doing.

I always start with the music. That’s the most important part for me, and more often than not it develops out of just playing guitar or noodling. A specific idea sometimes manifests in my head and ends up in voice notes until I can work it out properly, but I never really sit down with the view of “lets write a song”. It doesn’t work that way and people end up forcing something. I carry a notebook and write phrases, poetry or prose in that so the lyrics are usually pulled out of that once the instrumental is finished.

There’s a couple of new tracks that I’ve written during lockdown that I’m really proud of. One in particular is quite heavy hitting lyrically and just builds and builds into this huge outro, but it’s a sort of culmination of all the sounds in my songwriting style. The lyrics are a bit more honest and delve deeper into mental health. I can’t wait to get that one into a studio for sure.

To believe in what you’re doing and stick with it. Trying to copy someone/something else or writing some phony sh– because it’s what sells is embarrassing. So be exactly what you’re supposed to be and it will show.

Something like a peanut butter and banana. But then someone’s tried catapulting all the other flavours at it while it’s cooling, and some of them stuck. But it works. Looks grim, you’d think it would be grim but somehow it bloody works.

It’s a catch 22 really, it has made it so that anyone can make music and get it out there which is great. It is easier than ever to connect with fans and promote yourself, especially recently during the lockdown. We’ve had people message us from South America and farther which is incredible. The flip side is that a lot of great music gets lost under a deluge of sub-par stuff. Looking at you soundcloud rappers…

The cookie cutter, reality TV nonsense that has become chart music. There is such incredible music of ALL genres out there and it often gets slept on because people are force fed this vapid auto tuned rubbish and just haven’t heard of artists that I’m sure they’d love. It’s also created this culture of musicians feeling like they’re at war rather than being supportive. We’re lucky that our scene is like a family and everyone is in it for the right reasons, but so many bands are hostile to each other which completely sucks.

Probably being able to spiral an American football. Or being able to quote a bucket load of Jim Carrey films perfectly. Both will get me nowhere in this life, maybe in a parallel universe I’ll marry the two and replace Dan Marino in Ace Ventura…

That I threw myself into being creative and never stopped putting my all into it. Music has helped me a lot and if something I’ve created can do that for someone else then I’ve succeeded.

We’re working on our debut EP at the moment, schedule was pushed back due to Covid but we’re looking to release that in the autumn but at the moment date wise everything is up in the air. I’ve spent the whole of lockdown writing and making art, so there’s a lot of music to be recorded and maybe an exhibition or something to make use of the rest! After that, when it’s safe we’re just going to hit the road and play as many shows as we can. We’ve got 7 months of making up to do!