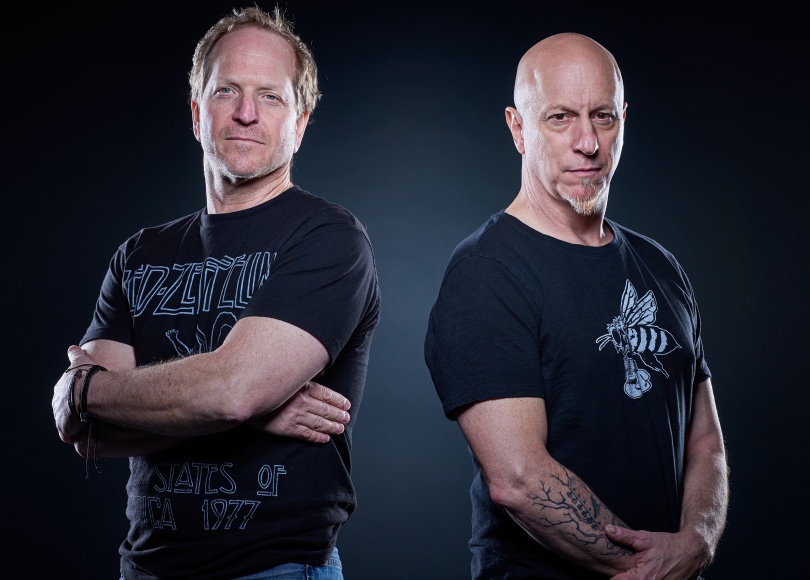 Eddie Vedder is my musical hero. I’m mesmerized with his writing and try to capture the messaging, passion and energy that he does in his songs. If I can even come within a million miles of that I’d consider it a success. Other bands that have influenced me over the years including Zeppelin, Tom Petty, Foo Fighters, Cheap Trick and Pink Floyd.

I see a lot of images and moods when I write. Certain chord progressions, finger pickings and riffs often direct me on how the song is constructed and then the lyrics start to flow. It’s a bizarre process but it works for me. I actually write my songs on an acoustic guitar. Even riffs such as the ones on “New Revolution” and “Medicate”. I feel that if it sounds good on an acoustic then it’s going to sound even better when it’s plugged in.

The song “The Optimist” off our album “New Revolution” really hits home for me. With all the sh– going on today in society and in our own personal lives, it’s a song about trying to remain optimistic about things and looking at the half-full side of life. The lyrics “I’ve got the rest of my life and I’m not going to stop ‘til I get it right” is a statement about not giving up when things look dire. There’s no rush. You’re in charge of your own destiny. Get it right the best you can. But just try to get it right.

The Internet has created incredible opportunities but also huge challenges. From an opportunity standpoint, with such advanced technology and portability, you can create some amazing music in your bedroom and even collaborate with people without having to be in the same room. On the flip side, there’s thousands of songs being released on Spotify and other platforms every day so the ability to break out and get noticed is highly challenging. Unfortunately, the industry isn’t looking to develop bands anymore. I think the first thing they ask now is “how big is their social media following?” You’re on your own to develop your sound, talent and audience and then you can try and make it. Tough times no doubt and it’s only for the diligent and resilient bands that want to really invest in their music and build an audience. You constantly have to think and rethink how to break out and get noticed.

I wish there were more terrestrial and satellite radio stations that played music from new and up and coming rock bands. Stations used to have programs that were dedicated to discovering and providing exposure to new bands. Seems like that is few and far between these days.

I can impersonate sounds after hearing them for the first time.

I’m happy when anybody talks about me about anything! In all seriousness, we’re a retro-rock and roll band that combines sounds and styles from some of our favorite classic rock bands like Pink Floyd, Pearl Jam, Foo Fighters, Green Day and Cheap Trick. If people think that we’ve done a good job of keeping those great sounds alive then I’d be really happy about that.

We continue to push our album, “New Revolution” which has the guitar-God Vernon Reid from the band Living Colour playing lead on the track “Medicate”. We just released a song and video called “Rich Man Wanna Be King” which provides a scathing lampoon of President Trump. It was just released on YouTube and it’s already racked up over 115,000 views and climbing. Our video “New Revolution” has already racked up over 60,000 views and climbing.  We’re about to release a wicked cover version of Jefferson Airplane’s “White Rabbit” where we collaborated with an incredible husband/wife team called Che-Val. We’ll be releasing a quarantine video to our song “The Optimist”. And, we’re about to release a podcast called “Music & A Brew” where we crack open a cold one with musical artists including Kenny Aronoff (drummer for John Mellencamp and tons of others), Todd Sucherman (Styx), Vernon Reid (Living Colour), and Daxx Nielsen (Cheap Trick).