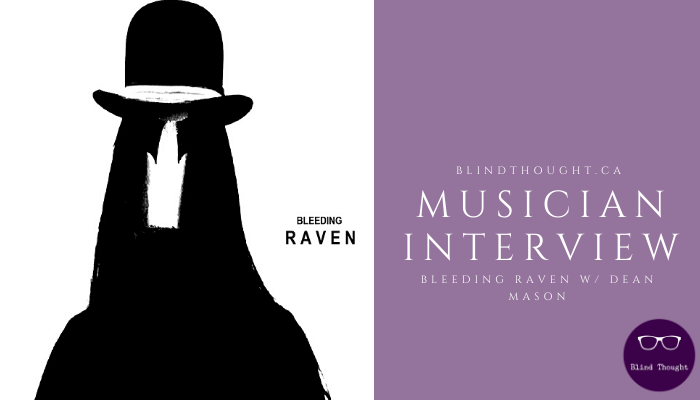 I’d have to say that the first person to inspire me to think of pursuing music was Gary Numan. Probably my biggest inspiration. But also, in 2011 I think, I discovered “Global Citizen”, and more specifically the track “Broken Doll” and I was, “OK…this is what I want to do!” And not long after that I began setting up to record music. But I need to backtrack as well, cuz I keep forgetting my own ‘roots’ –as a teenager, I began to mess about with the idea of doing some music. Some mates and I went into a little studio and recorded two songs I wrote and released that as a single. The tracks were “Dark Hallway/Golgotha” and it was released simply as “Dean Mason” and it was released on “Lonely Ghost Productions” indie label.

I start off with a vague idea of want kind of song I want to do, Then I begin with beats and drum patterns and bass lines or even synth lines. (it depends) I get a general idea of the direction I want to go in before going far into the track. So, I begin to choose the different sounds and samples/loops that I want as well to give it a mood. More often than not, I manipulate these and distort or whatever to make them unique.  I allow the track to sort of dictate to me where it’s going…sort like a First Nations wood carver who allows the ‘wood’ to speak to them as they say. Then when I have a rough demo, I begin writing lyrics and then record vocals. That’s the tough part for many reasons. Lots of hit and miss with that process. I’ve written an entire set of lyrics for a song only to discover that something else would work better and I have to (at times) chop out some of the lyrics. Hard to explain.  Also, sometimes I record the vocals and it sounds like shit. I mean, there is a need for a different ‘style’ all together. After all the vocals are recorded, I go back and add more …sometimes a sample here or an FX noise there or whatever. I’m quite ADD so if there are any sort of ‘blank stare’ moments in a song…that’s unacceptable. It has to be busy. I’m told my music is VERY busy. Then there is the final mix which is a real pain in the a–. Sometimes even at that stage you decide… “nah…this is total sh–”! It’s a bit of a drag when that happens though man because you’ve come all the way to a full song and you realize it isn’t happening.

Oh, come on. You know they’re all chart busters! Hahahahaha. I don’t know. I think my latest, “VERRTRANDT” is at least my favourite, even if it may not be my “best” as you say. It’s personal this one. I’m ashamed of myself that I haven’t put in more effort to promote this and that’s because of time restraints (music isn’t my career) and also just simply not knowing how best to promote myself. I have all these social media accounts and I barely put the effort in to follow more people. My Instagram and TikTok are a joke. I just haven’t been inspired to seek out people too much and so…anyway…it is what it is. Here is the video for that track.

Take it…one day at a time.

Come again? Um…I guess shortbread. Maybe it’s because of the Christmas season but, shortbread cookies are simple but sweet. Not sure I’m simple or sweet but…f– it…I’m going to have a shortbread cookie now and some hot cocoa.

By ‘internet’, I’m  sure you mean digital music, social media, websites, etc. ? It’s all good in my opinion. People can complain about it and focus on all the evils of social media and streaming and what have you, but at the end of the day, it’s all here to stay so, make the best of it. I think, instead of looking at the negatives, seek to use it in a positive way and be decent. Don’t play games and don’t be nasty to others, even your critics and just keep focused.

I’d like to see some of the so called ‘elite’ experience a reality check. Some artists who once struggled to get noticed, and have ‘made it’  often have become very full of themselves and arrogant. I’ve no patience for that. We are all born naked and we all turn into a sack of bones. Give the f–ing ‘elite club’ attitude a rest and rejoin the human race. I don’t like ‘elitism’ in any domain. The big boys and girls at the record labels? Some of them are the same. I’d love to meet some of the folks at Road-Runner Records who went from being a label for alternative acts to being these “hi fi mega stardom” talent search agents. Anyway… (snarls and crawls back into the coffin…)

I’ll get back to you on that…I’m having a tough time with these metaphysical meanderings. hahahahahaha

I just hope they see a guy who just wanted to express himself in some way with some kind of art in an honest fashion. I’m no genius and I’m no big star.

My latest, and most important release is “VERRTRANDT” and we just released the video for this. Much thanks to William Westwater who put it together and my nephews, the “Morrison brothers—KB and K-Jay”.

There is a Gnostic Gorilla release coming soon, or a rerelease if you will. “Geishab0y Records” have a single to be released soon as well as some other goodies come the end of the year and next Winter 2021. I’m so excited and honored because Rich of Global Citizen is one of my inspirations …in the pursuit of recording music.